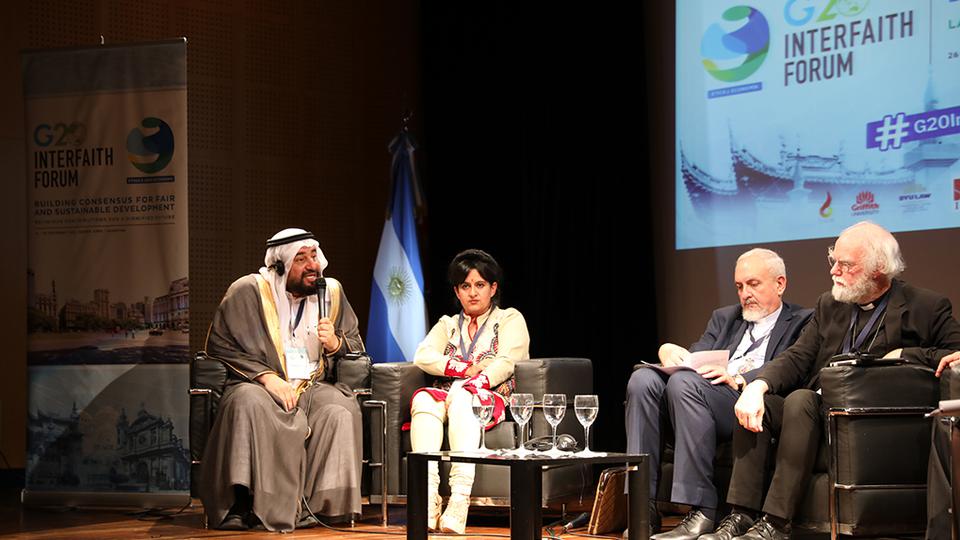 BUENOS AIRES, Argentina — Minutes after last month's G20 Interfaith Forum officially began, as stragglers continued to wander in and search for seats, Brian Adams, one of the event's organizers, took the stage to share a harsh truth.

The G20 Interfaith Forum, attended by religious and political leaders from six of the world's seven continents and celebrated as one of the most important interfaith activities undertaken anywhere, can't be content with a strong reputation, said Adams, director of the Centre for Interfaith and Cultural Dialogue at Griffith University in Perth, Australia. It still has growing to do.

"I wonder where we'll be after 20 years, faded from public spaces or seen as legitimate, integral partners in policy development and social well-being," he asked the assembled crowd.

Adams' remarks were both ominous and optimistic, a pairing of tones repeated throughout the three-day event. Participants and speakers seemed confident that, together, they could help end suffering around the world. But they weren't always sure where to start.

"We need better strategies," said Rabbi David Saperstein, the former U.S. ambassador-at-large for international religious freedom, during a presentation on Sept. 27. "How do we actually take what goes on here and have an impact on the G20?"

The G20 Interfaith Forum aims to influence the agenda and policy proposals put before the secular G20, a gathering of leaders from the world's major economies that begins in Argentina at the end of November. Over the last five years, the forum has taken some important steps in that direction, sending recommendations on the refugee crisis and famine directly to G20 participants in Germany and forming friendships with government leaders in Argentina.

But leaders have also faced several roadblocks, like the challenge of honoring religious diversity and trying to appear unified at the same time.

"The religious world is ferociously big and complicated," said Katherine Marshall, senior fellow at Georgetown University's Berkley Center for Religion, Peace and World Affairs. "The idea that it will somehow speak with a single voice is not plausible."

Photos of newly constructed desks and smiling young refugees lit up the screen behind Sharon Eubank, director of LDS Charities, the humanitarian arm of The Church of Jesus Christ of Latter-day Saints, as she described faith-based efforts to heal the world's pain. During her Sept. 28 remarks at the forum, she spoke about people instead of government policies, arguing that concern for human dignity should guide humanitarian programs.

"We're dealing with people not at a high level but at the tent level," she said of religious service organizations. "We think a lot about how to make policies work at the level of that family in a tent."

They also commit to long-term initiatives, instead of regrouping after every election, said Rowan Williams, the former head of the Church of England, during his Sept. 26 address.

"Religious traditions do not operate on a time scale dictated by political elections," he said.

The G20 Interfaith Forum, which was attended by around 300 people this year, was formed to take advantage of these unique characteristics and make a case for more coordination between faith groups and the government, Adams said. People of faith hold special knowledge that benefit efforts to address the refugee crisis, climate change and other global problems.

"When we first developed the (forum) concept more than five years ago, we saw it as an opportunity to showcase the powerful contributions that can be made when people and organizations from across political, national and religious boundaries work together to address pressing challenges," he said in his opening remarks.

Each forum consists of panels on the same topics that will be up for discussion at the secular G20. This year's key themes were workplace ethics, climate change, fair governance and immigration. Speakers explained their on-the-ground work and highlighted best practices for supporting and improving government programs.

These gatherings highlight the moral significance of decisions made by world leaders, said Marshall, who serves on the forum's organizing committee. They focus on the people and communities that the wider world too often forget.

"All our religious traditions hold that there are no superfluous or unimportant human beings," Williams said during the opening session.

Although political leaders around the world regularly praise community service work led by people of faith, religious groups have struggled to convince G20 participants to make room for them in policy debates. Lawmakers generally don't want to appear to privilege some faith groups over others, forum leaders said.

"The dialogue between religion and the politically powerful is not always peaceful and we all know it," he said. Faith groups must consider how to "preserve (their) identity and independence."

Additionally, they must consider how to stay true to their own religious teachings in an interfaith context, Marshall said, noting that conference organizers work hard to acknowledge and respect religious diversity.

"What you want is to have religious communities committed to work together and sharing the best insights and experiences they have," she said.

In addition to addressing church-state and interfaith tensions, forum leaders must navigate a variety of other challenges that stem from how the G20 system operates. The G20, comprised of leaders from the European Union and 19 other major economies, doesn't have long-term directors. Each year, there's a new set of people in the host country to coordinate with and impress.

"Every country is different," Marshall said.

In Germany last year, the forum had a strong relationship with the various think tank leaders who make up Think 20, one of seven official G20 engagement groups. The faith forum, which does not have official status, offered input on the Think 20's policy recommendations, which were then formally submitted to G20 leaders.

This year, forum organizers in Argentina have a close relationship with government officials, including leaders in the Ministry of Foreign Affairs and Worship. Argentina's Vice President Gabriela Michetti spoke on the first day and expressed her interest in staying in touch with participants.

Both situations are worth celebrating, but they don't offer a guarantee of future growth, Marshall said. In Japan in 2019 and Saudi Arabia in 2020, new connections will be necessary, including with religious communities.

"The (G20) leadership is explicitly and clearly shifted each year to the host country and that's paralleled in the religious voices," she said.

Because of various political and practical roadblocks, G20 Interfaith Forum leaders don't take it for granted that their input will be embraced. So they work hard to say something memorable and unique.

“It’s not clear to me that we’re going to be listened to just because we’re religious voices. We’ll be listened to because of the quality of ideas,” Marshall said.

Over the next two months until the secular G20 begins, the forum's organizing committee will rehash what was discussed in September and settle on some concrete suggestions to pass on to government leaders through various channels. This year's recommendations will likely focus on how to counter violent extremism and end government corruption, Marshall said, adding that the forum will also urge G20 members to protect people on the margins of society.

The forum's approach to passing on its conclusions is less formal than other G20-adjacent groups, which bothers some participants. However, others embrace putting more energy into panel discussions than policy papers, arguing that the formality of the Think 20 and other engagement groups hurts diversity and creativity.

"We must … not link our work to the G20 so that we aren't limiting our capacity," Albacete said.

Participants on both sides of this debate do agree there's value in the forum even when it doesn't directly lead to new policies. They celebrate the chance to meet with people from around the world and of a variety faiths.

"Many of these organizations’ efforts ultimately combat divisiveness and insecurity, provide access to education and health care, empower minorities, and promote gender equity," wrote Zahra Jamal, who attended this year's forum and serves as associate director of Rice University's Boniuk Institute for Religious Tolerance, in an email. "I look forward to finding ways to work with colleagues I met from across the globe and across sectors."

They also share a sense that gatherings like the G20 Interfaith Forum are needed now more than ever before. Around the world, countries are struggling with economic inequality, political polarization and a general lack of empathy. Religious communities need to raise their voices, Rabbi Saperstein said.

“We religious people are the purveyors of the most important message that we need today: That we are not the prisoners of a bitter and unremitting past, but that we can be, we must be, we will be the shapers of a better and more hopeful future,” he said.