Changing the World...One Muslim Woman and One Jewish Woman at a Time 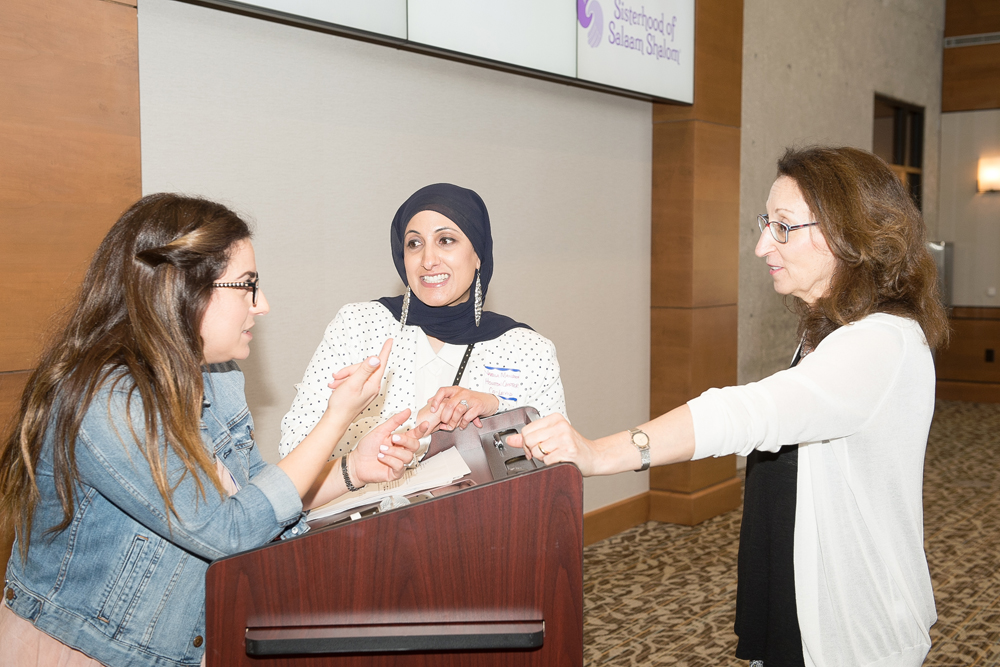 The Sisterhood of Salaam Shalom is not your typical sorority. Yes, its members are only women. Yes, it’s a national organization with chapters in multiple cities across North America. Yes, members can rise through the ranks and assume leadership positions. But, membership in the Sisterhood of Salaam Shalom requires no financial commitment, and no rush parties or periods of pledging like you’d find on college campuses.

It is open to women of all ages, and the mission of this sisterhood is simple: to change the world one Muslim woman and one Jewish woman at a time through conversation and social and service projects.

“It’s definitely NOT a political organization,” said Janet Penn from Boston. “Our mission is to build relationships and friendships between Jewish and Muslim women, so that we can stand up for each other.”

Why now and why women?

According to Penn, there were 40 chapters in the United States before Donald Trump became president. Since the election, the number of chapters has grown to 150. Houston’s five chapters, known as circles, were formed in 2017, not long after Trump took office. Penn said, “People feel there has been a spike in the anti-Muslim and anti-Jewish acts of aggression, and women, generally, have a much easier time building relationships.”

“The demoralization after the last election was so divisive,” said Nabila Mansoor. “I had to make friendships to address that divide.”

Mansoor is Muslim. She and Emily Deakins, who is Jewish, are co-leads and oversee Houston’s five circles, which are based on geographical locations. They include the Inner Loop, Southwest/Pearland, Memorial and two in The Woodlands. In terms of the number of Muslims and Jews, every circle is 50-50.

Circles convene independently every four to six weeks. Deakins said, “There’s a real need for people to have that connection to build bridges. This sisterhood speaks to that.”

Penn was in Houston to lead a regional training session on Sunday, Oct. 14. Sixty-five members from Houston and Austin came together for the first time for a day of dialogue at Interfaith Ministries, and to learn how to have meaningful conversation. Through interactive activities, Penn took a three-pronged approach: self-reflection, how to ask questions, and how to listen for facts, feelings and values based on the book, “Practicing the Art of Compassionate Listening.”

As one attendee put it, the program was about learning how to address the elephant in the room without getting all riled up.

One by one, members shared with the JHV why they joined the sisterhood. Sana Ali is Lebanese and grew up in Dubai. “I had never met a Jewish person and struggled to make new friends in a new land,” she said. “I found unconditional love and acceptance and discovered extreme similarities, both religiously and culturally.”

One member said it was hard being an “other” in The Woodlands. Dede Fox said she wanted to meet other “others” and be able to ask questions in a safe space. Fox found the whole experience to be very satisfying.

Cantor Diane Dorf’s circle recently shared lunch together in the Beth Yeshurun sukkah. “I feel women need to stand together and promote our love of peace together and look for common interests together. Jews and Muslims share a lot of the same religious values.”

Dr. Zahra Jamal is a member of the Inner Loop circle and the associate director of Rice University’s Boniuk Institute for Religious Tolerance. She echoed many of the same sentiments as the other sisters in attendance.

Every circle determines its own area of focus. But recently, there was a call to action on the national level to promote voter registration. Houston’s co-leads immediately spread the word through the local circles and on Facebook.

When immigrant families were separated at our country’s borders, members of the sisterhood came together to prepare care packages for the affected children. Mansoor said, “I see our political world in shambles and I feel I can be part of the solution, here.”

Training included a PowerPoint presentation. One slide read: “An enemy is someone whose story you haven’t yet heard.” The sisterhood provides an opportunity to delve much deeper in dialogue, and the sisters are discovering that similarities among Jews and Muslims extend way beyond hummus!

For more information about the Sisterhood of Salaam and Shalom, visit sosspeace.org.