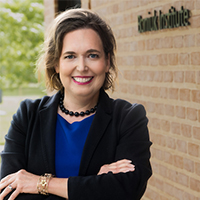 Elaine Howard Ecklund is an internationally acclaimed sociologist of religion, and the Herbert S. Autrey Chair in Social Sciences, professor of sociology, graduate program director and founder and former director of Rice's Religion and Public Life Program. She is best known for her sociological work on the intersection of science and religion, and has also published research on religious discrimination, religion and immigration, religion and race, and religion in the workplace.

Dr. Ecklund received a Ph.D. in 2004 from Cornell University, where she was the recipient of the Class of 2004 Graduate Student Baccalaureate Award for Academic Excellence and Community Service. She has been a Gifford Lecturer and was the 2022 recipient of the Rice School of Social Sciences Dean’s Distinguished Senior Researcher Award, and she is a former president of the Society for the Scientific Study of Religion and the incoming president of the Religious Research Association.

She assumed the directorship of Boniuk Institute in 2022.